Now you can Save Recorded Mouse Clicks on your Mac OS X with MurGaa Macro Recorder. As displayed in the Screenshot below, you need to Click on File Menu and then Click on the Save Menu Option to save recorded Macro containing Mouse and Keyboard Actions. Yes you can use the Open Menu Option of the File Menu to load already saved Macro containing Mouse / Keyboard Actions. 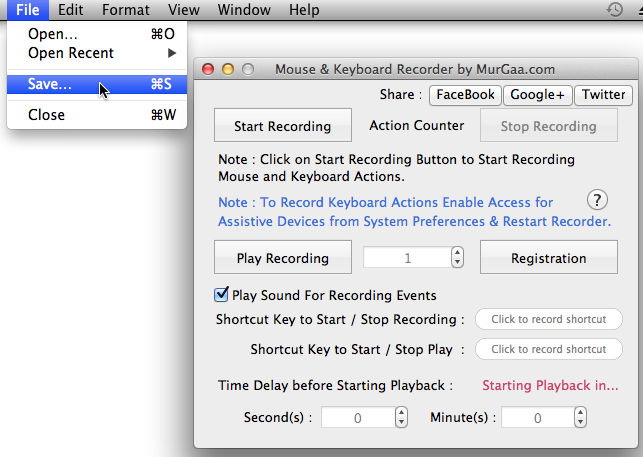 Save Mouse Clicks on Macintosh

Changes in Display Resolution are not taken into consideration and hence if you have saved Mouse Clicks in a File at a given resolution, you must only load the Saved Mouse Clicks in the Macro Recorder for Mac at original Screen Resolution. Before starting the playback of any saved Macro File containing Mouse Clicks / Keyboard keys, make sure that Playback parameters of the Macro as visible in the Software Screen are as per your requirements.

Download this Macro Software on your Mac Mini, MacBook Pro, MacBook Air, iMac or any other Apple’s Macintosh running OS X 10.6 or later including 10.7, 10.8, or even 10.9 to Record and Save Mouse Clicks. There is no limit in the number of Mouse Clicks you can record and save with this Macro Recorder. While Saving the Mouse Clicks / Keystrokes, do name the File Appropriately so that you can load and playback the recorded Mouse and Keyboard Actions appropriately.